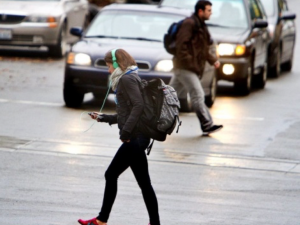 His Honour Judge Main QC on 11th May 2017 handed down judgement in this case at Manchester County Court. David Sandiford, instructed by Irwin Mitchell, appeared for the Claimant; Charles Feeney, instructed by Keoghs, appeared for the Defendant. At approximately 12.10 pm on 24th December 2013 Ms. Chloe Wheatcroft, the then 14-year old Claimant, was involved in a road traffic accident with a van driven by the Defendant Mr. Brine. The Claimant attempted to cross the road between two cars that were stationary in traffic at a set of lights. At the time of the collision, the Defendant was driving slowly to the right of the stationary cars, positioning himself to join the traffic preparing to turn right at the lights. Neither party noticed the other until the Claimant collided with the front left side of the vehicle. The left side of the vehicle features a retractable step for assisting with moving Mr. Brine’s disabled son into the vehicle, which protrudes approximately 2 inches from the side of the vehicle.

The Claimant was helped by a number of onlookers, in particular X, who had been in a car in the left side queue of traffic at the time of the accident. She suffered profound fractures of the right tibia and fibula, friction burns and a degloving injury to the right foot and she underwent a number of medical procedures, including a galaxy frame. The court noted the complexity and length of recovery efforts and expressed sympathy.

The Defendant denied all allegations and maintained that he had adopted a slow, safe speed; he had paid due attention to the road, and that the Claimant had simply walked into his vehicle. Further, or in the alternative, he claimed that she had been negligent in attempting to cross from a dangerous position; in not taking due care to check the road before attempting to cross; and in using a mobile phone while attempting to cross.

Mr. Brine stated that he had adopted a slow, careful speed and that his attention had been focused on the road ahead. He pointed out that it was for this reason that he had not seen the Claimant. He accepted that it was likely that he had encroached upon the hazard but maintained that this was not relevant as he was beyond the hazard when the accident occurred. He also accepted the possibility that he had pulled out from traffic to move into the second queue, rather than merely approached and filtered into that queue whilst moving.

X offered two lengthy statements about his recollection of the event. The first, given close to the time of the accident, was affected by his suffering from PTSD. On examination he preferred his second statement, which was not so affected. He maintained that the Defendant had been travelling at approximately 10mph and that he encroached on the hazard but would have been principally concerned not to encroach onto the lane on the other side. As noted, he was certain that the Claimant had been on her mobile and that she had walked out into the vehicle.

HHJ Main QC reminded himself that he did not have to make a finding on every material issue. He accepted that the Defendant’s account was genuine and that he was probably mistaken in relation to his witness statement. The judge found it likely that he did enter the hazard but did not find that this was an unsafe manoeuvre.

Notwithstanding the contradictions in X’s evidence, HHJ Main QC was satisfied that he was a reliable, independent witness and accepted his evidence in relation to the Claimant’s using her mobile and stepping into the road.

In relation to the Defendant’s driving, HHJ Main QC made two significant findings. First, that the Defendant had breached his duty in “focusing his attention in a blinkered way to the traffic lights and to the offside having left the hazard.” Second, that a reasonably prudent motorist would not, at a speed of 10mph or less, have adopted any evasive or cautious action merely at the sight of a pedestrian on the pavement.

Though the ordinary prudent motorist would scan the road ahead on an intention to move out and thereby become aware, cautionary action would at most be taken once a pedestrian stepped to the curb edge. In this instance there is no evidence to suggest that such action taken at the point of the Claimant’s stepping out would have avoided the collision. The finding of breach in relation only to the ‘blinkered focus’ was not causative of the accident or injuries.

In the circumstances HHJ Main QC did not accept the evidence of the Claimant or her mother in relation to the mobile; preferring that of the other witnesses. He found that she had been using it at the time and had failed to take sufficient care, which even at 14 she would have been expected to do. He therefore suggested that had causation been found, he would have also found contributory negligence at 40%.

This case emphasises how difficult it is for a Defendant motorist to escape liability in an accident involving a pedestrian. As we commented in relation to the case of McGeer v McIntosh the “lethal weapon” argument is now regularly deployed both in relation to primary liability and contributory negligence. It is notable that, despite no liability arising in this case, had contributory negligence been engaged it would have resulted in a reduction of only 40%.

The Claimant walked out of a passageway between two buildings, briskly across the pavement and between stationary vehicles so as to walk into the side of the Defendant’s vehicle which was slowly overtaking a line of stationary vehicles. On the Judge’s findings, the Claimant was paying no real attention to crossing the road but rather was preoccupied by a heated conversation on her mobile phone.

The Defendant, a mature driver with an exemplary record, was moving slowly to the right of the stationary traffic with the intention of turning right at the lights. Whilst at the commencement of his manoeuvre he had marginally passed over the hazard markings in the road, which was not in strict compliance with the provisions of the Highway Code, the Judge held that this was not causative of the accident as the Defendant was established in a perfectly reasonable position in the carriageway when the accident occurred.

Apart from emphasising the difficulty of a Defendant motorist resisting liability in these circumstances, the case also raises the issue of the use of mobile phones whilst crossing the road. It is, of course, a criminal offence for a motorist to use a mobile phone whilst driving. It might be argued that a similar offence should exist for a pedestrian crossing the road using a mobile phone. Coincidentally, very shortly after the judgment, the Mayor of Honolulu announced that from 25 October there would be a criminal offence of “distracted walking”. This was to protect “smart phone zombies” from injuring themselves. A study undertaken by the University of Maryland in 2015 indicated that there had been more than 11,000 injuries resulting from phone related distraction whilst walking in the United States between 2000 and 2011. The offence in Honolulu, which will be punishable by a fine, makes it illegal to use a mobile phone whilst crossing the road subject to a limited exception of an emergency call.

We are now very regularly obliged to listen to mobile phone conversations whilst people are on the street or on public transport. Judging by what is heard, very few, if any, of these conversations could not wait. If the law reasonably is requiring a very high standard from motorists in relation to pedestrians, it would not seem unreasonable that pedestrians should be obliged by law to show a very basic standard of care in terms of concentrating on crossing the road rather than a conversation on a mobile phone.